Triplanetary, First in the Lensman Series 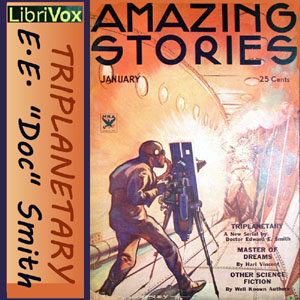 Triplanetary, First in the Lensman Series

Triplanetary was first serialized in Amazing Stories in 1934. After the Lensman series became popular, Smith took his Triplanetary story and turned it into the first of the Lensman series, using it as a prequel to give the back story for the protaganists in the Lensmen series. He added 6 new chapters, doubling it in size and it's really a different book from the serialized novel, being published 14 years after the first. It was put into Gutenberg just last year.

The novel covers several episodes in an eons-long eugenics project of the super-intelligences of the Arisia. This alien race is breeding two genetic lines to become the ultimate weapon in Arisia's cosmic war with their arch enemy, the Eddore. The initial chapters cover the Kinnison genetic line during the fall of Atlantis and Nero's (Gharlane of Eddore) reign in Rome. These tales were inserted into the novel following the serialized release, along with chapters covering members of the Kinnison line in World Wars One, Two and Three. The final chapter of Triplanetary tells of the discovery of the inertialess drive that allows faster than light travel. Patrolman Conway Costigan and his friends engage in a space battle with Gray Roger the pirate gangster. This conflict is complicated by the arrival of the technologically superior, extra-Solar, amphibian-like Nevians, resulting in the first interstellar war involving humans. In this story Virgil Samms and Roderick Kinnison, two very important members of the eugenics project, are introduced. They will play the leading roles in the next story, First Lensman. (Summary by Wikipedia and Phil Chenevert)

Reviewer: peanuts123 - favoritefavoritefavoritefavoritefavorite - February 26, 2012
Subject: Please may we have MORE...
I read the most books of the Lensmen series 30 years ago. Still cannot forget the sense of awe and wonder created by the first chapter of this book.
I really hope we have the rest of this grand space opera put up in your site.
Phil Chenevert's reading is clear and well paced. I look forward to more of his renditions.
Thank you very much.

Phil is a great reader, and this story was well done. I also listened to the other version and it too is wonderfully done. I hope the subsequent versions are read soon!